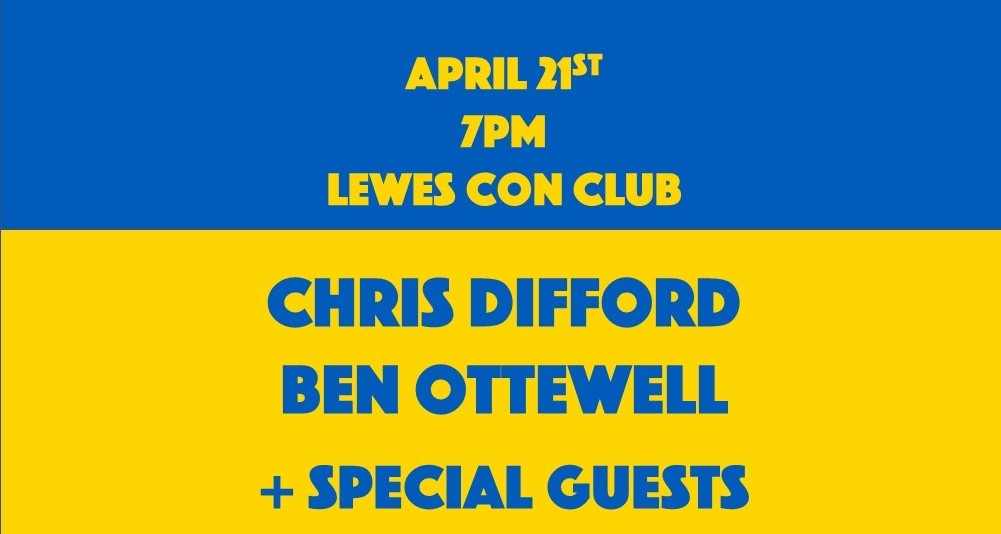 Hilltop Sessions and Lewes Con Club are hosting a very special evening to raise funds for the victims of the Ukraine conflict. Squeeze’s Chris Difford and Gomez’ Ben Ottewell will perform with support from Lewes and Ukrainian artists . A special musical evening for an important cause.

NOTE: This event is standing only

Chris Difford is a founder of the legendary Squeeze who has been Grammy nominated and twice won the Ivor Novello Award. Chris has brought us characters and sketches from everyday life, and has successfully turned the mundane into the beautiful, the urbane into the exquisite, for over 40 years.

With his collaborator, Squeeze co-founder Glenn Tilbrook, Chris has written some of the most enduring and best-loved songs of our time such as ‘Up The Junction’, ‘Cool For Cats’ and ‘Labelled With Love’, ‘Tempted’ and many others.

He is one of the country’s most respected songwriters and has co-written with a host of musicians and performers that reads like a veritable who’s who of the music industry.

Ben Ottewell is a founding member of Gomez, the British rock act whose debut album, Bring It On, won the Mercury Music Prize in 1998. Gomez never had a designated frontman — Ottewell, Ian Ball, and Tom Gray all sang, and the band’s albums usually included several vocal performances from each — but Ottewell took the helm more than his bandmates, making him one of the group’s most prominent members. After releasing the band’s sixth album in 2009, he began paving the way for a solo career, making his debut with the release of 2011’s Shapes & Shadows. His second album, Rattlebag, followed in 2014. In early 2017, Ottewell released the single “Watcher” in anticipation of the release of his third full-length outing, Man Apart, which dropped later that May.

Lewes-based singer-songwriter Maia Eden will perform songs from her debut EP New Horizons as well as a few new tracks from her forthcoming album.

We are also delighted that Olena Holt and Dasha Mineyeva will sing a couple of songs in Ukrainian. Dasha is a singer-songwriter who has arrived from the Ukraine in the last few weeks to be with her mother, Olena. We are truly thrilled they have agreed to bring a bit of their homeland to the evening.

All proceeds will be donated to the Disaster Emergency Committee’s Ukraine Appeal. DEC charities are in Ukraine and neighbouring countries meeting the needs of all refugees and displaced people.

For the price of two tickets you could provide emergency food for a family for one month or blankets for four families.