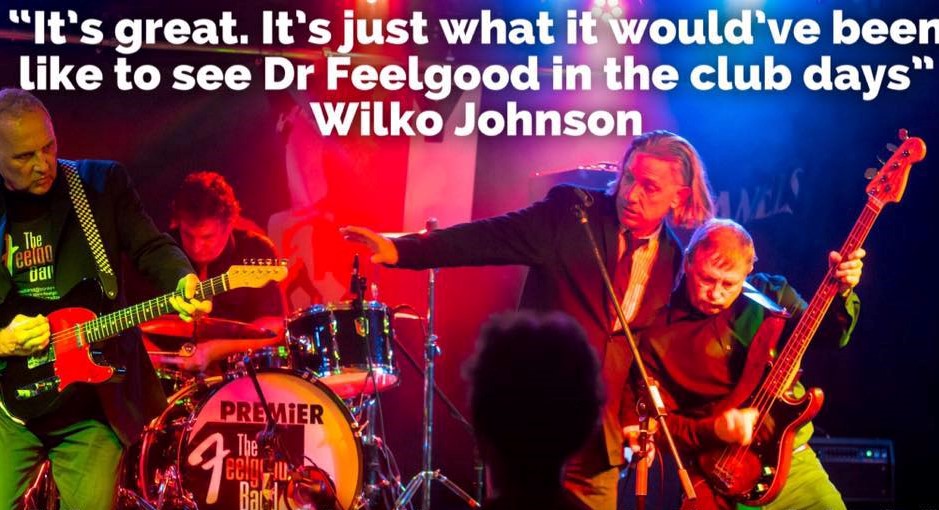 Download ICS Google Calendar iCalendar Office 365 Outlook Live
We are pleased to welcome back The Feelgood Band to the Con Club
Bar from 5:00pm. Door 8:00pm. Show 9:00pm to 11:00pm
Tickets £10 in advance from the Club bar or www.skiddle.com or £14 on the door. Age limit 14+ (‘no age limit’ on ticket site is not correct)
The Feelgood Band! With a seal of approval from Wilko Johnson, Sparko and Figure!
All the following quotes are from those who have seen The Feelgood Band live!
“Man, it’s great. It’s just what it would’ve been like to see Dr Feelgood in the club days. 100% spot on stage presence and performance’ – WILKO JOHNSON
“The closest to the originals I have seen” – John Sparks aka SPARKO
“Go and judge for yourself, it’s worth it” – John Martin aka Big Figure
Stephen Foster BBC Suffolk and Dr.Feelgood connoisseur – “Just seen the excellent Feelgood Band, a fantastic celebration of the timeless music of Mk 1 and 2 DrFeelgood . Loved it from start to finish. It would be sheer Stupidity to miss them.”
Richard England Exec Producer “Oil City Confidential” – “Spirit of the Thames Delta is alive and well, check them out!”
Louder Than War: “The UK’s Premier Dr.Feelgood tribute, a spellbinding performance”
High energy Rhythm & Blues played the Canvey Island way, recreating the unmistakable sounds of 1970’s Dr Feelgood